Cyberghost and Torguard are two high-quality VPN services, but how do they stack up head-to-head? We’ll examine both services in detail in our Torguard vs Cyberghost comparison.

Specifically, I’ll be evaluating both VPNs on specific criteria.

Our Pick: Cyberghost is going to be the better choice for most users. It’s better for both streaming and torrenting, has a larger server network and is a better all-around value.

Also, Cyberghost’s 45 day refund policy will give you peace of mind when taking advantage of their heavily discounted 2-year subscription deal.

In order to do an apples to apples comparison, we’ll be comparing Cyberghost’s normal VPN plan against Torguard’s ‘standard’ plan which includes 8 connected devices.

Torguard’s standard plan costs $9.99/month with monthly billing or $2.50/month with annual billing. By comparison Cyberghost starts at $12.99/month but it drops to a measly $2.19/month with a 2-year subscription (no annual plan available).

So Torguard is a bit cheaper for month-to-month, but Cyberghost is significantly cheaper (effective monthly basis) if you go for the longest term plan.

Since most users eventually purchase a long-term subscription after trying a VPN monthly first, I’ll rate the 2-year price most heavily.

Torguard offers a basic 7-day refund policy, whereas Cyberghost has an industry-leading 45-day moneyback guarantee. This is a huge gap, and a big edge to cyberghost.

Which is the better deal?

Torguard’s month-to-month pricing is cheaper than Cyberghost, but it also doesn’t include anywhere near the same features, especially when you consider streaming support and Netflix compatibility.

Moreover, Cyberghost’s 2-year subscription is significantly cheaper than Torguard’s and their refund policy is far more generous. This makes Cyberghost the better value.

The core purpose of a VPN is to provide secure encryption and private browsing. You want your VPN to be a security asset, not a liability.

Both of these VPNs measure up when it comes to security.

The cipher suite is similar between both providers and you can use up to 256-bit AES encryption with OpenVPN (the industry standard). Wireguard uses slightly weaker encryption for both providers, but it offers a more performant blend of security and speed.

Both Torguard and Cyberghost offer zero-log privacy. According to their respective privacy policies, neither VPN logs or records VPN activity or connection metadata which could be used to identify users retroactively.

However only one of these companies has had their logging policy independently verified by a 3rd-party auditor — Cyberghost.

Cyberghost’s no-log policy was audited (and confirmed) by Deloitte, giving additional credibility to their claims.

Both VPNs provide solid encryption and non-logging guarantees but Cyberghost gets the win here because their privacy policy has been independently audited.

A common VPN use-case is to unblock streaming sites from around the world or access different content libraries for global streaming platforms such as Netflix. Both these VPNs are usuable for that purpose, but especially Cyberghost.

In all, Cyberghost works with more than 50 streaming services around the world. Torguard works consistently with fewer than 20.

Both services work at least occasionally with Netflix.

While Torguard did work with several streaming services in our testing, it was not always successful and often required attempts with services that actively filter VPN traffic, such as Netflix.

Torguard does offer a ‘streaming IP’ addon, which is a static residential IP address (unlikely to be blocked). This works reliably to unblock streaming services but it has a few downsides.

Cyberghost supports 50+ streaming services, and multiple regions for several of the most popular including Netflix, Disney+ and Prime Video.

Our testing also found that Cyberghost worked more reliably to unblock notoriously challenging services, and required fewer reconnections or server switches. This is made possible by their network of special-use servers, each dedicated to a specific streaming service or region.

Cyberghost is the clear winner here. They are far better than Torguard for streaming and one of the best overall choices for that purpose.

BitTorrent is a touchy subject in the VPN industry and it can bring unwanted legal heat so some providers prefer to disallow it entirely.

Both Torguard and Cyberghost do allow torrenting but not without restrictions. Torguard especially has modified their rules regarding torrenting after recent legal headaches.

Cyberghost allows BitTorrent on specific server locations, designated as p2p-optimized servers in the Cyberghost software. These servers are available on all platforms except iOS (which doesn’t allow torrent apps).

In our testing, torrent download speeds were mediocre (less than 2Mbps), and seeding appeared to be blocked altogether (probably for legal reasons).

So while Cyberghost is usable for torrenting, they wouldn’t be our first choice. And it wouldn’t work with private trackers because you couldn’t hit required seed ratios with uploads being blocked.

Torguard built their entire business around p2p traffic, and much of their early customer base was BitTorrent users. However Torguard has had to pivot away from torrenting recently after losing a recent lawsuit about illicit filesharing activity on their network.

As part of the settlement, Torguard agreed to block BitTorrent traffic on all US-based servers (via a firewall).

Nevertheless, Torguard still advertises itself as a ‘Torrent VPN Service’ and does allow torrenting from other torrent-friendly jurisdictions.

Both of these VPNs are acceptable for torrenting, but neither is best-in-class. We’d rate them about the same for this purpose, but not as good as standouts like NordVPN and Private Internet Access.

All things being equal, a larger server network is better. The more available server locations, the more IP addresses you can choose from and the more virtual locations you can use.

This is especially helpful for streaming services tied to specific regions for regional news or sports broadcasts which can often be had for free rather than buying an expensive sports streaming package.

Cyberghost clearly has the edge here over Torguard, with servers in 91+ countries compared to Torguard’s 48.

That said, Torguard’s network is still larger than the industry average (around 30) and they likely have a presence in most of the regions you care about (exept China).

Verdict: Cyberghost has nearly 2x the country coverage of Torguard and wins this round handily.

Most users will connect to the VPN through the provider’s own VPN app, rather than configuring a connection manually. This makes the software and UI extremely important.

Both Torguard and Cyberghost have their own VPN client apps available for multiple platforms.

Both services have dedicated apps for:

This covers the vast majority of VPN-compatible devices, making it easy to get up and running with either service.

Cyberghost’s software was overhauled after the Kape Technologies aquisition and no features a smaller footprint, reminiscent of Private Internet Access’s v3 software (also owned by Kape).

The software is intuitive and gives easy access to the most important features such as choice of VPN protocol and server selection.

You can easily sort or filter servers by country, distance, or intended use-case (e.g. Brazil Netflix).

The mobile app (iOS & Android) offers near identical functionality, including an automatic kill-switch on both platforms. Android adds split-tunneling capability which lets you route specific apps through the VPN tunnel.

The software lets you swap between available VPN protocols including OpenVPN, Wireguard® and IKEv2, though the exact selection varies by OS (desktop apps get all 3).

Their apps do feel a bit less polished than Cyberghost, however, despite a recent UI facelift. That said, the difference is purely aesthetic and the VPN connections work reliably as do security features like the available kill-switch.

Both of Torguard’s mobile apps are well-reviewed with iOS ratings being especially good at 4.7 (out of 5).

Protocol choice includes OpenVPN (TCP & UDP) as well as WireGuard®. SOCKSv5 proxy connections can be configured manually, but not through the app itself.

Verdict: Which software is better?

We give Cyberghost the edge for a slightly more polished UI and add-on features like SmartRules and special-use servers.

Torguard does offer a stealth protocol (Cyberghost doesn’t) but that isn’t enough to close the gap.

Quality support can be a huge asset if (and when) things go wrong, or you need help setting up the VPN on your device. This is one area where we say huge differences between services, and it’s definitely worth considering.

It took less than 1 minute to get a live-chat agent to respond to my support request and she confirmed that they provide technical support in addition to billing and account-related questions.

I gave her a tricky test question about SmartDNS setup and she did answer it correctly though she lacked the technical expertise to fully explain the answer. Still, this was better support than I’ve received from other VPNs with Live Chat.

In addition to personal tech support, Cyberghost has a vast library of device-specific setup guides and troubleshooting tutorials. You’ll be able to answer most troubleshooting questions on your own simply by browsing their documentation library.

Torguard’s support is 100% ticket-based (or email). There is no live-chat or phone support. In my experience response lag time is 1-3 days which is not great but not terrible.

There is also a knowledgebase with basic setup tutorials and troubleshooting tips but I found it less-extensive than competitors like Cyberghost or PIA.

Cyberghost’s support was clearly a cut above that of Torguard thanks to real live-chat support and a much better documentation library.

In my expert opinion, Cyberghost beat Torguard connivingly in their head-to-head matchup.

In fact, they won most rounds in this comparison, with Torguard hardly winning any.

What Cyberghost does better

What Torguard does better

Torguard was slightly faster Cyberghost, especially on nearby servers. It’s also a bit cheaper on the month-to-month pricing, as well as their annual plan (which Cyberghost doesn’t currently offer).

Torguard has a few tricks up its sleave that Cyberghost can’t match, such as their available Stealth Protocol for circumventing firewalls. Other than that, most of the neat features (like streaming IP’s) are only available as paid upgrades, instead of being bundled in the base subscription like Cyberghost.

Who should choose Cyberghost

Cyberghost is going to be the better choice for almost every use case, but especially streaming or mobile usage. Their software is a notch above Torguard’s and the customer support is far more accessible.

Finally, Cyberghost’s audited privacy policy should give you peace of mind that your traffic and usage will stay private.

Who should choose Torguard

I’d really only consider Torguard if one of the following things are true:

Because in all honesty, Cyberghost is better at almost everything else. Think we got this one wrong? Let me know below. 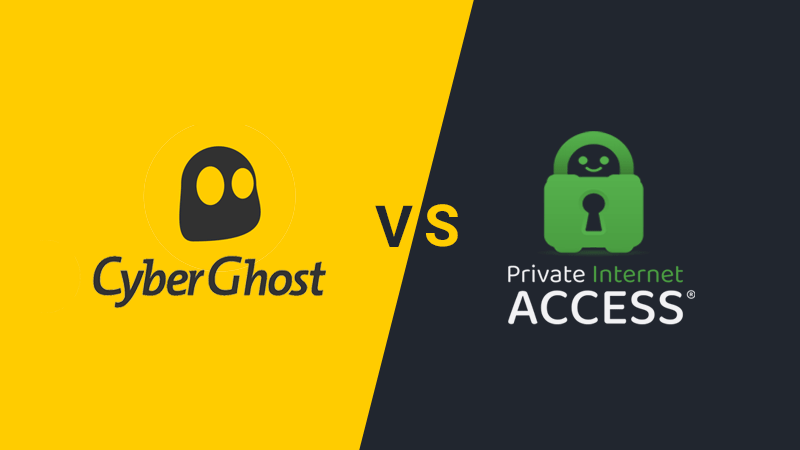